Eleven months after taking the helm of the LSU Foundation, Stephen Moret is ready to revamp the way the university raises money – Baton Rouge Business Report

When LSU President F. King Alexander hired Stephen Moret in 2015 to lead the LSU Foundation as president and CEO, he charged the former economic development leader with creating a new fundraising model that will position LSU with one of the best advancement programs in the country.

That would be a lofty goal at most any university. It’s a particularly daunting challenge at LSU, which has one of the worst advancement programs around—if not in the nation, then certainly among its peer institutions in the Southeastern Conference. LSU’s rate of alumni giving ranks last in the SEC, and its endowment growth trails all but two of its counterparts in the conference.

But Moret is up for the challenge. In his 11 months on the job, the former secretary of Louisiana Economic Development—known for his brainiac problem-solving skills, encyclopedic command of facts and figures, and tireless work ethic—has brought in national experts, researched the data, identified the issues and begun to lay the groundwork for a completely new approach to fundraising at LSU. It will include a major capital campaign with a goal that Moret will only say is “well in excess” of $1 billion.

“This will be a big effort,” says Moret, who led the Baton Rouge Area Chamber for more than three years prior to serving as LED secretary between 2008 and 2015. “This will be a campaign that will be about establishing LSU’s future in the state and the country.”

LSU has long lagged behind its peer institutions in the area of fundraising, or what is known in the industry as advancement. Its three-year rate of alumni giving participation is just 6%, the lowest in the SEC and less than half the conference median of 14%. Its endowment per student, at $14,100, is also at the bottom of the list. By comparison, Texas A&M’s is $193,600, Arkansas’ is $37,800, and even that of neighboring Ole Miss is $27,200. LSU also has less than half the SEC average number of annual donors, who, statistics show, are most likely to make large gifts of $25,000 or more.

There are several reasons for the university’s lackluster performance in the advancement arena, and much of it boils down to the fact that fundraising at LSU has never been done correctly or comprehensively. The university hasn’t cultivated its donor base aggressively enough, hasn’t targeted enough nonalumni donors, and has allowed its three main advancement entities—the LSU Foundation, Tiger Athletic Foundation and LSU Alumni Association—to operate as independent silos with separate databases and outmoded technology.

All this matters because there is a direct correlation between a university’s level of alumni support and its national rankings. For example, Moret says experts have told him that one reason LSU, at No. 129, didn’t rank as high on the U.S. News and World Report’s 2016 Best Colleges list as did the University of Alabama, at No. 96, is because its rate of alumni giving is much lower.

“The single biggest reason for the difference between us and Alabama in the rankings is our alumni giving,” Moret says. “So it’s important for our national ranking and for the value of the LSU degree.” 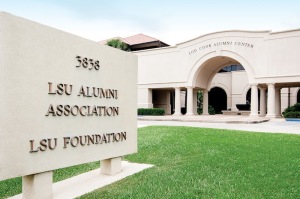 When Moret took over at the LSU Foundation last May, one of the first things he did was begin looking for one of the top consulting firms in the nation to advise him on overhauling the university’s fundraising apparatus and preparing for a major capital campaign. Originally, that campaign was to focus on the flagship campus. But when leaders at the LSU Health Sciences Center in New Orleans found out about the nascent plan, they were eager to be part of the effort. Other campuses within the LSU System also expressed an interest in joining in.

The result is that for the first time in the history of the university’s advancement efforts, the Pennington Biomedical Research Center, LSU Shreveport, LSU Alexandria and LSU Eunice will join LSU Health Sciences Center and the flagship campus in planning for a major capital campaign, which will launch sometime in mid-2018 at the earliest.

Late last year, a committee led by Moret retained Marts & Lundy, the New Jersey-based firm that will help lead the effort. The consultants are conducting an assessment of the university’s current efforts and helping craft a blueprint for future development. “They’re helping us understand where are we weak, what big opportunities are out there, where can we go and ultimately what kind of capital campaign we can launch,” Moret says. “They’re also determining what pieces we need to put in place.”

The first phase of the consultant’s report is due in May. It won’t offer a specific blueprint for the campaign just yet, but it will identify opportunities. Moret likens the process to one used during his tenure at LED, where the agency’s business intelligence team studied companies and identified prospects. He credits that approach with LED’s success in attracting business to the state and believes the LSU Foundation can employ the same tactics in attracting donors to LSU.